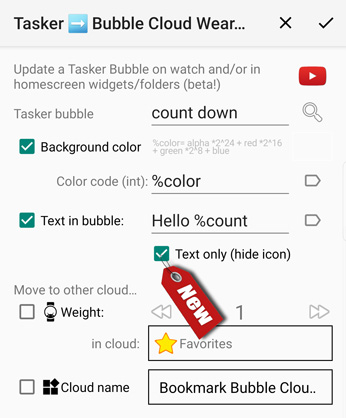 Normally the option “Color match card icon” will take the primary color from the icon, and use it to tint the peek card. This works well for apps which use the contact image. But some apps don’t do this, and for multiple messages they usually use a monochrome app icon. Earlier this produced white cards for most notifications.

Starting with v9.76, if the icon on the peek card only has one color, Bubble Cloud will generate a consistent color from the text in the title row (usually the name of the app). I am using the first 3 letters:

As you will notice I worked out an algorithm that works for any app and card label, but produces close to the standard colors for many apps:

Other apps are generated some random color, but at least you will be able to differentiate them at a glance. See some examples at the right →