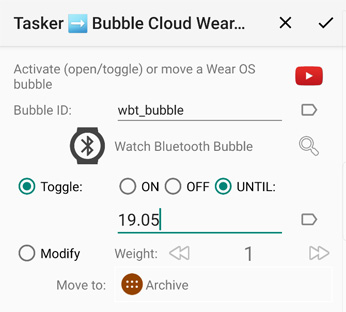 *Thank you to Richard Jones and Rickard and for reporting the issue with the cloud removal. 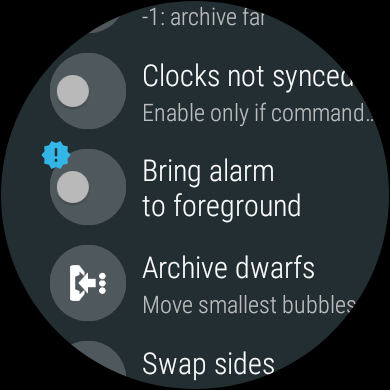 I implemented a feature in Bubble Cloud that keeps the alarm clock in the foreground when it starts to ring.  This is to prevent the annoying situation, when we accidentally switch away from the snooze/cancel screen while the alarm rings. Without this workaround it was very difficult to get back to the alarm screen to snooze or cancel! Very very annoying, especially if you want to keep your watch quiet after it woke you up.

Some apps (e.g. Sleep as Android) use alarms in a non-standard way, which turned out to cause interference with Bubble Clouds**, so starting with version 9.80 the alarm workaround is only enabled for the standard system-alarm clock app by default, and you can optionally enable it for other alarm clock apps (under “More options” in the settings on the watch).

**Thank you to Luiz for reporting the strange issue with Sleep as Android that prompted this fix.

Added a 3rd option for toggles in Tasker plugin:

#1 is necessary if you want to disconnect your watch on a schedule*** – previously there was no way to re-connect it, since Tasker lost connection it wasn’t able to turn Bluetooth back ON! The other 3 are added for convenience.

Important note: while you can control Wifi on the watch as well, on many Wear OS watches we found if Wifi is set to “Automatic” (in the system settings), as soon as you turn off Bluetooth, Wifi will automatically be turned on, no way to turn it off!  Since user apps are not allowed to toggle Airplane mode, the only way to put the watch into “Airplane” mode on a schedule is to use the system setting to keep Wifi OFF and use this Tasker plugin to toggle Bluetooth.

The example below turns off Bluetooth for 2 minutes:

*** Thank you to Francesco for pushing me to implement this option!